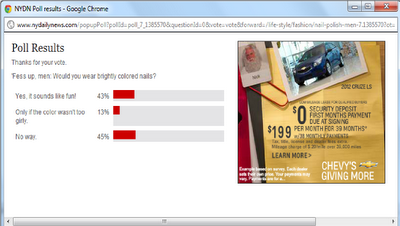 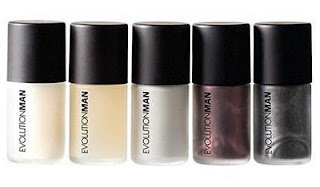 You would think they were the first company to market polish for men by the way the are getting so much press. However, they are raising awareness and hopefully making it easier for guys to be accepted with polish. I was surprised that 43% of the men would wear polish in bright colors in a recent poll. The source was the New York Daily News website. The reaction to the introduction of the line is quite varied, depending on the article. I was amazed how closed minded and ignorant so many of the comments were on one of the articles. Yet on another, they were supportive or at least neutral. Of the four or five articles I found, it seems that women are more accepting of polish on men then they used to be.

It would seem that we are chipping away at the negative attitudes toward male polish lovers. It will be nice if it gets to the point where polish is no more a big deal than a ring, bracelet or any other any accessory.
Posted by Guy Polish (Jim) at 6:03 PM

Guy Polish (Jim)
Hawaii, United States
I am regular guy that just happens to like nail polish. Polish should be for everyone. I played Offensive Guard in college and may not be the stereotype of a male polish wearer.